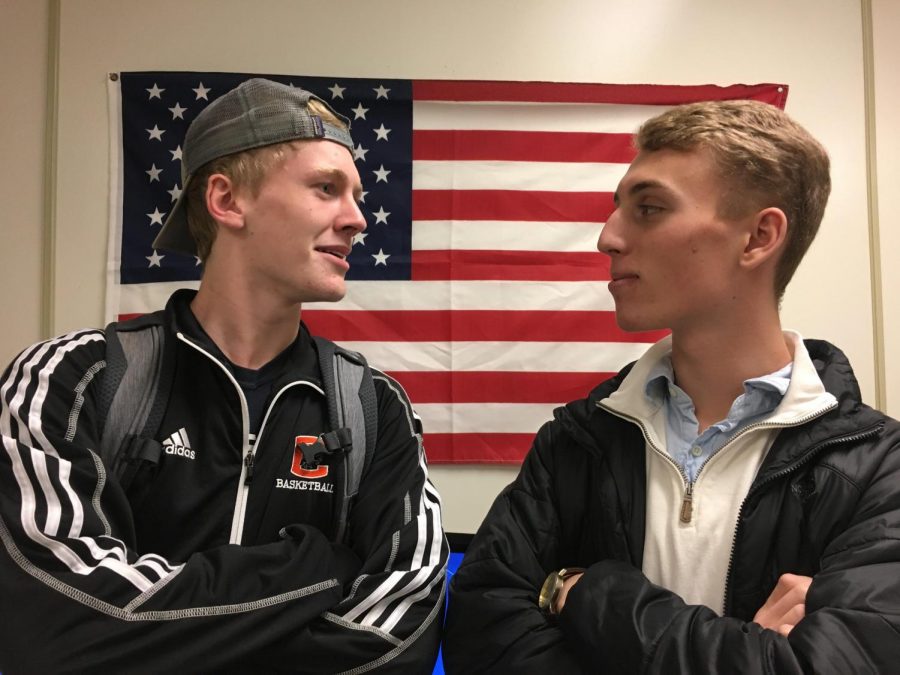 What Exactly Can(‘t) You Say?

How free is your speech? What can and can't you say at school?

Many are familiar with the First Amendment and the rights it ensures: freedom of speech, freedom of the press, freedom of religion, freedom to peacefully assemble, and freedom to petition the government. One of these fundamental principles, “freedom of speech,” is particularly relevant in our education system. There have been countless court cases, arguments, protests, and debates over how this amendment extends in the school systems and what rights, if any, are left when you walk through the school doors.

As students walk into C.H.S., they should not hesitate to express themselves openly, but must also be aware and willing to take responsibility for what they say–especially if it goes to court.”

There is one particular Supreme Court case that has served as a precedent to these debates and often comes to mind when discussing the issue. Tinker v. Des Moines Independent Community School District (1969) was a court case that originated in Des Moines, Iowa. A group of teenagers collectively decided to wear black armbands to school, signifying their support of a proposed truce in the ongoing Vietnam war. Soon, school officials were notified of their plan and constructed a new rule stating: “Any student wearing an armband would be asked to remove it, with refusal to do so resulting in suspension.” Despite this new policy, the students still arrived on school grounds wearing their black armbands. Quickly, they were dismissed from school by administration.

In the following weeks, the students filed lawsuits against the school district. Following two decisions, one originating from a circuit court and the other a U.S. court of appeals, that upheld the decision in favor of school administration, the case found its way to the United States Supreme Court. After trial, the original verdict was overturned. The Supreme Court justices believed that the wearing of armbands in public facilities is considered a form of speech and expression, something the First Amendment protects. The Supreme Court justices deduced that in order to constitute the school’s decision, officials must prove that the item in question would “materially and substantially interfere[s] with the requirements of appropriate discipline in the operation of the school.” For years, this is the standard schools everywhere have used to decide whether or not something–speech or attire–is provocative enough to ban. There have been several more cases that have shaped the extent to which the first amendment applies in educational institutions. In Morse v. Frederick (2007), the court concluded that educators may restrict speech if it “invade[s] on the rights of others” or if it is “vulgar and offensive” (because of its specific wording, not because of a particular standpoint).
Allen Robinson, a criminal law teacher who specialized in the First Amendment at U.Va. School of Law, argues that: “people who care deeply about their kids and their safety aren’t always weighing the impact it can have on students to limit their free expression of ideas.”

When asked which rights are modified upon entrance of the school, Robinson stated that “it’s [not] quite as easy for you to speak in an unfettered way” because of the government’s interest in public education. When asked if constitutional rights were constrained because of this interest, Robinson said that it “is easier for the government, in the form of a school, to argue that they have an interest in limiting your speech inside of school.” Even with oft-debated statements such as the Confederate flag or Black Lives Matter apparel, it is very “difficult,” Robinson said to “shut down” those freedoms. There must be a very clear and convincing argument presented by the school to limit speech. Oftentimes, these “freedom of speech” scenarios are taken on a case-by-case basis; administration must take into account the specificity of the threat and whether any violence or disturbances have occurred as a result of the item, before validating the removal of a said item. However, with respect to Tinker v. Des Moines, Robinson asserts “the school alleging that bad things may happen is not a good enough argument to keep them from wearing a political statement… even if the statement is an offensive one.” Clay Hansen, Executive Director at the Thomas Jefferson Center for Protection of Free Expression in Charlottesville, quoted a tenet in free speech law substantiating Robinson’s stance: “you cannot punish an unpopular speaker based on the perceived reactions.” In other words, a serious interruptive event must occur or be on the verge of occurring to merit removal. 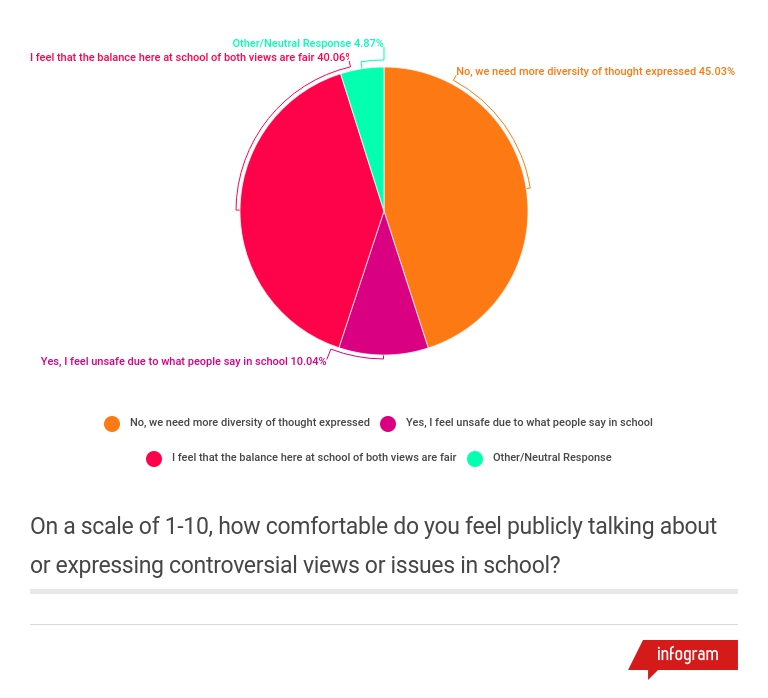 Hansen, who recently spoke to the K.T.R. on the issue of free speech, believes that “as students in public high school, your rights under the First Amendment are essentially coexisting with the speech rights of the general population.” However, Mr. Hansen did include that a school could easily dictate “anything that is causing threats and has the potential to escalate in this environment is a material disruption, and in the interest of education and safety, the school could take steps to prevent it.” Generally speaking, “there is no consensus on how to handle these things,” Hansen said. Instances brought to court pertaining to the First Amendment in school truly are decided on a case-by-case basis, and that while there are certain aspects taken into legal consideration, there are very few specific laws that govern this issue or mandate a certain response.

When discussing the First Amendment in school, there is no finite law or statute that says what constitutional protections one does or doesn’t have. While courts do take past rulings into consideration, there is no guarantee that the next verdict will blindly uphold a student’s rights or the school’s. It is important to remember that the majority of these court cases are tried separately and are up for the court’s jurisdiction and interpretation o

f the situation to make a final ruling. As students walk into C.H.S., they should not hesitate to express themselves openly, but must also be aware and willing to take responsibility for what they say–especially if it goes to court.

Free Speech: For Whom Is It Really Free?

I’m asking: can we honestly say we’re surprised that the First Amendment doesn’t protect Black people? The same golden constitution we often refer to was written only in the interest of white men; on August 11th and 12th, the constitution served as just that.  Are we surprised that an event that claimed to have the purpose of exercising their First Amendment was able to shut down a city and ra...

In an increasingly divided, partisan nation, the idea of shying away from others’ viewpoints is reprehensible. We cannot afford to turn our backs, plug our ears, or only spend time with those who think like we do. But as students, at colleges and high schools alike, the movement for absolute, unrestrained free speech is complicated. As with anything we learn, time must be devoted to processing n...

There seems to be some discrepancy with what a “safe space” is and isn’t. It’s actually very simple. A safe space is a designated time and/or place where all participants or those otherwise present can expect a basic level of respect. A safe space is not a place to silence all opinions that are not your own. It is a place that acknowledges that, just by existing, a number of marginalized groups...