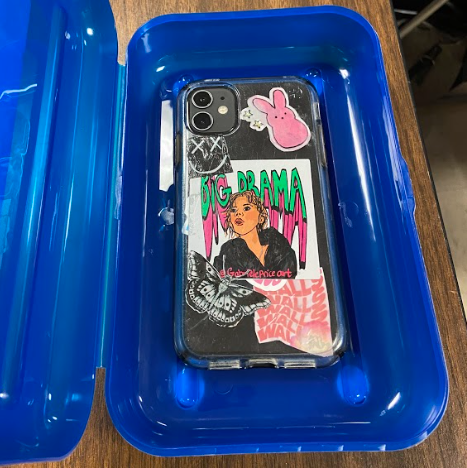 Addiction is a strong word, yet it is used every day to describe the relationship between students and their cell phones. Teenagers all around the world are becoming more addicted and reliant upon the constant

screens. As a result of this issue, Charlottesville High school has implemented a new policy concerning the use of cell phones by students; specifically during school. Although cell phones can be a helpful resource for students, using them during class time has become a controversial topic between these teenagers and school administration.

The new CHS phone policy creates a classroom environment where phones are not allowed during educational learning periods, including BKT. Teachers are enforcing this by telling students to place electronics into pencil boxes or envelopes under their desks. “Phone Zones” and “No Phone Zones” are new this year and determine where students are allowed to use their phones throughout the school day. “No Phone Zones’ ‘ include anywhere during class time, while “Phone Zones” are hallways, buses, lunch, and during transitions.

Phones have been proven to be a distraction during class and in some cases, prohibit the ability to learn. A survey completed by Charlottesville High School students showed that 70% of students believe cell phones negatively impact academic success. Not only does it affect academic success it has also been proven that it affects students’ mental health. 70% of students agree that social media negatively impacts their mental health. This puts a mental strain on developing brains and creates a lack of focus at school.

Although there are a lot of negative impacts of cell phone use, there are some benefits, as specified by students in the surveys: “Listening to music helps me get through a lot of things. [It] Helps me keep in touch with friends and family that live far away. You can find information very easily through the internet,” a student stated on the cell phone survey. Many students voiced that their phones are useful for educational purposes as well. Sophomore Sophie Slawski expressed, “I can use it as a calculator, to look up words if my computer is not charged or quick answers if I don’t have time to get my computer.”

We interviewed students grades 9-12 and the results were all very similar. A lot of students shared the same idea that some sort of phone policy was necessary, but the current one is excessive. “I think it’s important for us to not be on our phones in class, but there are other ways to go about it. Just telling kids that you can’t use your phone at all is going to make them want to use it more” sophomore Sophie Slawski stated.

Another disagreement among students and staff is the level of engagement in class. When asked if they felt more engaged in class, most of the students answered with “no” or “not particularly.” Senior Sylvia Koester voiced: “I think that people are going to use phones regardless of whatever policies are in place. I don’t think phones are the primary issue, it’s mostly just focus in general.” Opinions varied student by student, but most made clear that this policy has had no effect on them. Teachers and Administration had different views regarding engagement. AP Psychology and US History teacher Mrs. Hiller, expressed that the policy has created “less of a distraction with students having their phones off and away.”

After speaking to students, several offered ideas on ways to improve the policy. Overall feedback when asked what students would do to improve the policy was having the ability to listen to music while working, by having one ear bud: “allow students to have one earbud in” Junior Henry Shimer expressed. While other students conveyed the possibility of having more phone breaks. “I would give students 5 minutes after class to be able to check on their phones as an option,” Freshman Addy Buckner voiced.

We talked with Charlottesville High School’s new principal Mr. Pitt about his opinions/feelings regarding this topic. When asked about any improvements he would like to see on the policy: “I think we could potentially try to revisit how cell phones can be utilized instructionally, however at this time we have to see how this year goes,” he stated. This gives hope to the students that would like to use their phones during class.

“I think the fact that students are working in conjunction with the partnership with teachers is more important. We noticed the problem, came together as a collective school community to identify other problems, and what would be most appropriate to address those issues so we can keep students engaged and minimize distractions during instructional time.” he also voiced.

The new policy has brought a range of  opinions. There was an overall agreement  that a phone policy was necessary, but the variety of ideas on how to tackle the issue was immense and that’s where the controversy started.