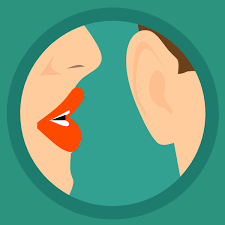 Gossip is a major part of high school and life beyond it. Multiple times a day people approach me or I tell others things that I have learned about my peers’ lives. It has become such a normalized part of life that I do not even recognize when things shared could be harmful or hurtful to others. This realization led to me asking the question: why do people, especially teenagers, feel the need to share other people’s information with each other? I discovered that the motivation for gossip was influenced by undervalued members of societies desire to bond together, while having negative societal pressures against them.

Gossip is defined by most as a casual conversation about people who are not present. Gossip has been a part of human society for centuries. Psychologists believe that our need to share about each other’s lives is natural. Gossip doesn’t necessarily have to be malicious or negative but only has consequences when it is. In fact, most gossip is not negative. The Journal of Social Psychological and Personality Science analysis found that 467 subjects spent 52 minutes a day gossiping on average. Gossip is used as entertainment mostly for people. While the motivations behind it might not be negative, it sometimes happens that the outcome is.

To understand gossip better, the start of it has to be uncovered. Religious aspects play into how our society’s views gossip, especially the Christian-Judeo faith. When studying the bible, gossip is taught to be a sin. This is because of the morality of it and the effects it has on the people being talked about. But gossip can be a useful and necessary thing. It is a stereotype of teenage women or girls to be the population that gossips the most. A negative connotation has been put on gossip by people in power, which for centuries has been men. Within not just religious organizations but in every aspect of life men have had a major power imbalance over women. When powerful men shame women for talking to each other about members of their community, it puts men in a greater position of power knowing that whatever improper thing they do to another woman or in society will not be talked about, therefore securing their power and silencing anyone who might speak against them. So is gossip such a bad thing if it is used to make suppressed people feel less alone?

In the case of sexual assault or harassment, women who have experienced that feel extremely alone and might find comfort in telling their story or warning other women about a predator’s behavior. Is that still considered gossip? It fits the definition of talking about people who are not present, so therefore it must be, and then it must be a sin. Or is labeling gossip as a malicious thing another form of patriarchal oppression which is aimed at targeting young women? Even though we know that young women are not the only members of society who gossip, it seems to be a pattern of shame put on them more than anyone else. So one must understand why teenage girls are the target of a worldwide phenomenon.

We gossip so that we can connect with each other which seems like a noble and productive thing. So the reason we feel so guilty and it has a negative connotation in society is from the generational silencing of suppressed people in order to preserve power. Though gossiping can have negative effects when it hurts others feelings and when it has malicious intentions, sharing information is essential for the progress and health of humanity. There is a line that separates connecting with your peers about relevant topics in your community and actively being malicious to people by spreading rumors. It is every person’s own responsibility to society and to their community to figure out how to navigate and share information. It is a moral dilemma that is a part of maturing, which is maybe why adolescents, especially girls, are most targeted for gossiping because they are still grappling with how they are navigating it as they grow older.