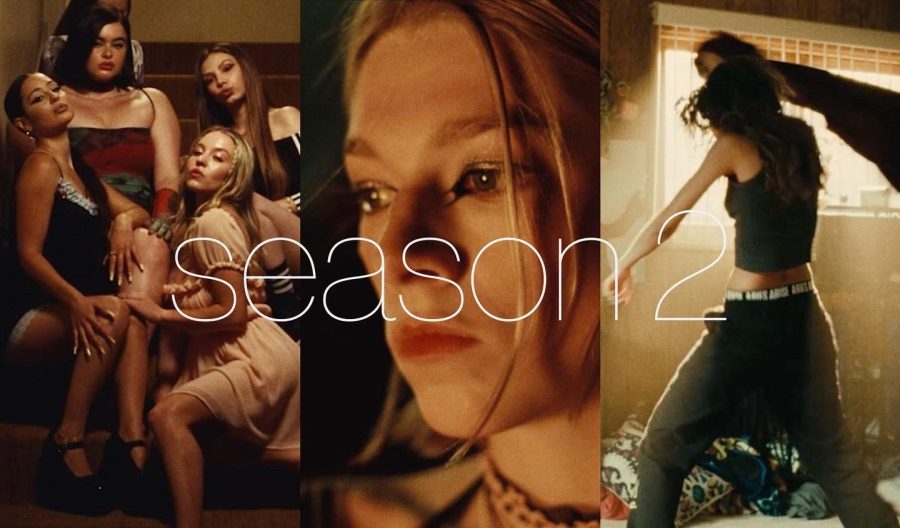 The show Euphoria was just announced to be the second-most watched HBO show of all time, with an average of sixteen million viewers per episode, a large majority of watchers being teenagers. The show focuses on a group of high schoolers and their experiences with drugs, relationships, identity, trauma, and more.

With big names such as Zendaya, Dominic Fike, and Jacob Elordi starring, the show has received lots of praise for its plot, cinematography, music, and character development. However, it has also faced a lot of backlash on its mature and explicit interpretations of certain concepts. The show is centered around themes such as drug addiction, abuse, and sexual content, and many adults have criticized the shows’ production team for this explicit portrayal of high school. To put it simply, people are upset that the show is an inappropriate, unrealistic representation of teenagers.

However, is this really the case? At CHS, most people were in agreement. “I feel like the concepts are relatable,” says sophomore Euphoria fan Lulu Jennings. “Not necessarily like the actions of the characters [are relatable], but the concepts that they talk about and like the things the characters go through can be for people our age. It’s not really relatable for high school in Charlottesville, but I think that there are definitely high schools like that.”

Mr. Rod, everyone’s favorite tech specialist here at CHS, expressed similar views. “I guess some of the drug use and intimate relationships do happen in high school, but not to the extreme that Euphoria portrays it as.”

So, perhaps the show is not completely accurate here at CHS, but that is just the start of the show’s controversy. One reason that the show has been expressed as attractive to viewers is its visual aspect. Not only is the cast obviously attractive, but the cinematography is notable as well. The singer-songwriter and producer Labrinth provided the majority of the show’s soundtrack, and his soft psychedelic tone added to the show’s aura. The makeup and costume department also had a big role in its production, for Euphoria is known for its extravagant use of glitter, sequins, sharp eyeliner, and bright colors. Due to these factors, as one can imagine, more controversy has surrounded the show. A lot of these aesthetically pleasing scenes and looks from the show occur during experiences with heavy drug use of the characters. Therefore, people see the production as normalizing and even glorifying this unhealthy behavior, as it portrays these trips as rather beautiful.

With that, the show has been viewed as not only inaccurate, but an unhealthy portrayal of teenage years. It has seemed to have an influence on teenagers, with not only more kids wearing this clothing style and makeup look, but also expressing the show’s effects on their mental health. Once again, a similar question arises: are these adult views of the show really the same as those who are exposed to high schoolers every day? Is the negative effect that Euphoria is said to have on students as severe as it is said to be?

When being asked these questions, different responses were given. “I love Euphoria, but I think it’s starting to get too controversial,” responded Diamond Mayo, a junior at CHS. “People are perceiving the show in different ways and trying to put it with life, when it isn’t a good example. Especially with the Nate and Maddy relationship, that’s very toxic, and I don’t want people thinking nowadays that toxic relationships are healthy when it’s not. People that actually are in toxic relationships don’t want it to be normalized because they’re very bad for your mental health, and can cause lots of differences between you and your peers.” This opinion is similar to many found in mainstream media and opinion pieces, stating that the show shouldn’t be normalizing such harmful situations. With so many teens watching and loving the show, some say that it is setting a terrible example for them.

However, is there perhaps a silver lining to this? Are these parts of the show the reason why it’s so popular? “I think it has had an effect on me,” said Mia Tyree, a sophomore. “I think certain people (like addicts) are seen a certain way, but I think as you watch the show, you see more from their perspective and how hard it can be to struggle with those things.” The influence of the show may be more than just negative after all. It certainly does shine light on these issues in many different ways- with the protagonists all struggling with such issues.

“I don’t think it’s affected kids in a negative way,” says Mr. Rod. “I think it’s created a conversation for students to have around the show and to connect with each other on a different level.” The topics portrayed certainly are real, and even if not directly, can be relatable for kids. “I was watching an episode, and after the episode, for whatever reason, it made me really emotional,” said Diamond. “Even though I’m not an addict, I really felt for Rue. Subtracting her addiction and stuff, I feel like she’s just kind of a misunderstood person and is really depressed. She just wants to be loved. ”

Regardless of the difference in views, one thing is clear: Euphoria isn’t just a fun, light watch. The serious topics and clear-cut nature of the show can certainly be hard to watch at times, and there definitely has been an impact on viewers- whether positive or negative. However, some would argue that it is an important watch, especially for high schoolers. It is undoubtedly an uncomfortable watch, but perhaps can be realistic in some ways after all.