Culture and Sports in Central Virginia 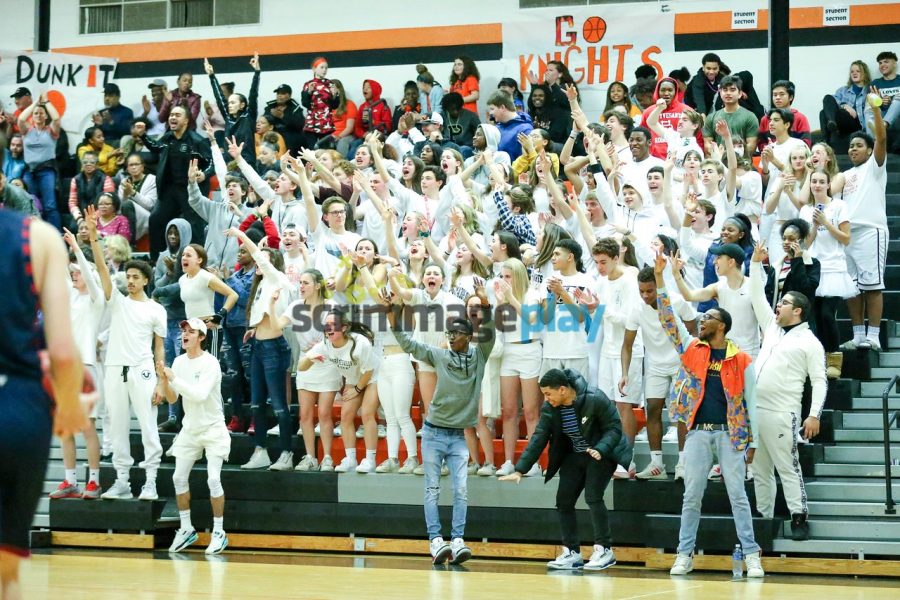 CHS' student section is riled up after a big three-pointer from Jake Bowling (2020).

The difference in cultures between certain sports in this area is quite interesting to me as an athlete in Virginia. Football, basketball, soccer, and the rest of the extra-curricular athletics all have distinct cultures at certain high schools across Central Virginia. From living in Baton Rouge, Louisiana between the ages of four and twelve, the idea that football was a major factor in most southerners’ way of life came upon me easily, as I had played since the time I was six years old. But as I moved to Charlottesville after the 6th grade, I began to wonder why football wasn’t as popular up here as it was down South. It took me a while to figure out, but as I played against different middle schools and highschools throughout the area, I came to realize that the plethora of different communities surrounding me all celebrated athletics in their own respective ways. I realized that taking a closer look at how exactly these schools differ in regards to popularity with each sport can be fascinating.

As the schools in the Thomas Jefferson district span from Western Albemarle in the west to Louisa in the east and Orange County in the north to Fluvanna in the south, there are drastically different cultures for each sport at each school. From personal experience playing football and basketball in this area, I have been able to watch and observe how each specific school and its fan-base operates in regards to each sport.

Since I attended Charlottesville High School as a student, it became clear to me early on that we have a very large focus on our soccer and basketball teams, while other sports like baseball and football tend to lack a lot of popularity within the school and with the fanbase. On the contrary, it was also easy for me to find out that a school like Louisa has a huge following for its football team that experiences consistent success. I attribute this difference in popularity to the simple fact of how culturally different each school division is in this area, despite all being within about an hour’s drive from each other.

To start, the most broad way of landscaping each sport’s popularity within a school is by looking at the school and it’s geographical standing. Schools that lay in rural counties, like Orange, Louisa, Fluvanna, and Goochland, are more likely to have a following in sports that align with rural USA culture (baseball/football). When you compare that to schools that have more of an urbanized population and location, such as Charlottesville and the surrounding ACPS schools, you get a more diverse focus of sports. For example, as the only school in our district that lies within a city, we have a huge following for our basketball team, as basketball is a widely-known urbanized sport. It is one that allows for all the intricate normalities of city life. I believe a good way to put it would be to say that it is much easier to find a basketball hoop and court in a city than a football or baseball field. As both Albemarle and Monticello High School are very near to the Charlottesville border, and Western Albemarle has the ever-expanding town of Crozet, it is no coincidence that these schools also have support and interest in their basketball teams as well.

Soccer is another very interesting sport to compare and contrast between schools and athletic departments in this area. Despite requiring a large field to be played on, the popularity for soccer in the Jefferson District also lies in and around the city limits of Charlottesville, but this time, for a different reason. The SOCA organization, founded in 1982, has been serving the Charlottesville and Albemarle communities with an elite soccer program for children of all ages. Whether it’s recreational or competitive, SOCA has provided a gateway for thousands of inner city kids to interact with the big-field game, and it has become a great success. SOCA now has travel teams that take trips all across the country to play other clubs in competitive matches, even placing very highly in national rankings for some teams. Despite being considered a difficult sport to play in urban cities, a preeminent organization like SOCA can change the way sports are viewed in any willing community.

Support from these fans and communities is what fuels the success of any team or athletic department as a whole. Getting people to come to the game, including young children who are prospective students, will induce those same children to play the sport that they idolize at these athletic events. Participation and support is where specific sports can drastically alter their path towards success.

From taking a birds eye view of the Thomas Jefferson District, you can evidently see the differences across each school’s athletic department, and where its popularity and support lies in regards to each sport and the fan base.