Cavaliers Vs. Hokies: The Rivalry Continues 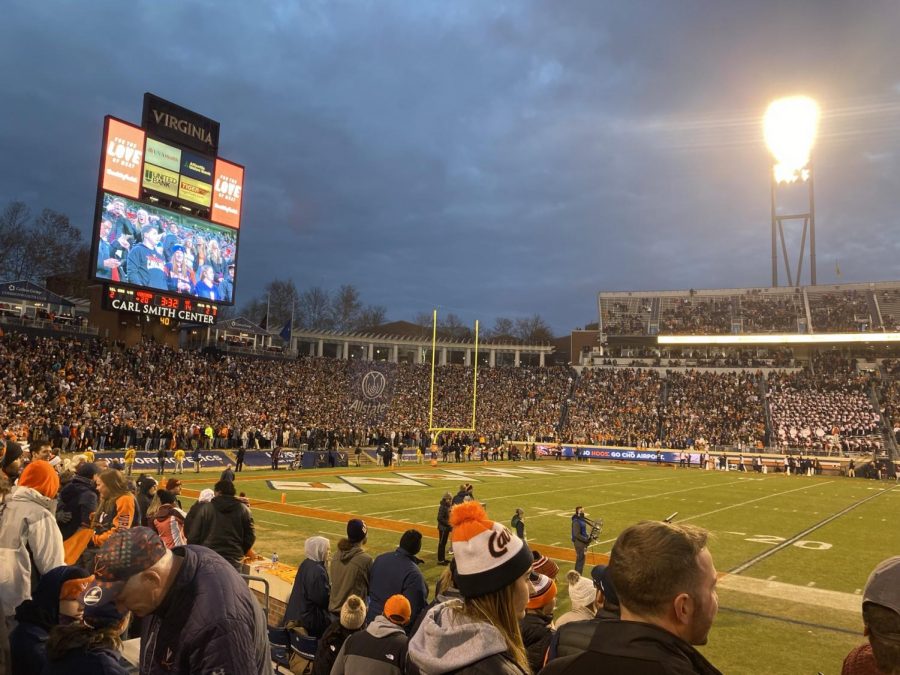 On November 27, 2021, the UVA Cavaliers will face off against the Virginia Tech Hokies for the 51st year in a row to compete for the Commonwealth Cup. The Cavaliers seemed to have an advantage over the Hokies because the game will be at home for them. Virginia Tech’s head coach Justin Fuente was recently fired and replaced with interim coach J.C. Price just under two weeks before the big game. Tech is 5-5 so far this season and is on track to have their second-worst season since Fuente started coaching in 2016, ranking them #4 in the ACC Coastal Conference. UVA ranks #2 in the conference with a 6-4 record before the game. Last year Virginia Tech beat UVA 33-15 at Lane Stadium, but in 2019 UVA beat Virginia Tech 39-30 at Scott Stadium breaking the Wa-Hoos 15-year losing streak. This year Virginia Tech came back and beat the WaHoos in a close game of 29-24.

Students and staff around CHS gave their opinions on the upcoming rivalry game before the game, and here’s what they had to say:
Lucas Simpson, senior: “Brennan Armstrong is a great player, and if we have him in this year, I think we could definitely win.”

Caldwell Boyles, senior: “Not a question, wahoowa. I don’t like Virginia Tech. Justin Fuente is gone, he wasn’t ever a good coach. Price can’t turn the team around less than two weeks before the game. The UVA atmosphere will be electric. I touched the Commonwealth trophy so it has a lot of sentimental value to me, and I will be in attendance (to the game).”

Jennifer Horne, English teacher: “My predictions are that UVA is going to win, but it’s going to be very close; Within a field goal!”

Lamari, junior: “I feel like UVA is going to win.”

Somaj, junior: “I think that UVA is going to win by three (points). It’s going to be a close game.”

Polo Hill, junior: “If our (UVA’s) quarterback is healthy, we’re going to win.”

Tino, junior: “UVA is going to get the dub.”

Matt Wilson, gym teacher: “It’s going to be a very interesting game we’ve got a lot of things coming here in play. Coach Fuente just got fired over at Tech, so we think there could probably be some good change from the player’s perspective. They’re (Virginia Tech) already motivated because they come in almost every season and beat UVA. UVA’s defense is suspect because they’re giving up so many yards and points per game. If we had an assemblance of a defense we’d be in a much better position and would probably have two additional wins. I’d like to think, being a home game and if Armstrong is available to be there then UVA will pull out a victory. All they have to do is win this week at Pitt, and next week at home to wrap up the Coastal division and wrap up the ACC Championship. If that’s not enough motivation to win, then I don’t know what is.”

Andrew D’Alessio, senior: “I think Tech is going to win because the statistics show they’re better, and they’ve always won. I think having a new coach will affect them though, because having a new coach in any sport is hard because it’s a change in personality and direction.”

Christopher Redieske, computer science teacher: “Virginia Tech is probably going to win. They’ve won the past few years and UVA tends to struggle when it comes down to pressure.”

Luke Movius, senior: “I’m super excited for the upcoming game, and I think UVA is going to win 28-21.”

Angus Munro, junior: “I think Tech is going to kill UVA because Tech is so much better than UVA.”

Although UVA didn’t win this year, the game was fun and exciting and there was lots of spirit and support for both teams.