Review of The Crucible 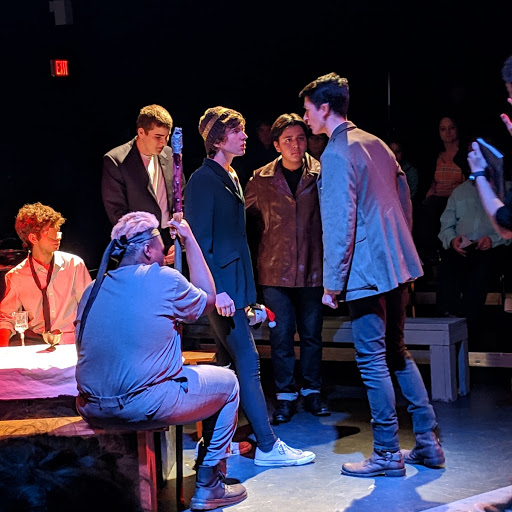 A confrontational scene from Act 2 of The Crucible.

The C.H.S. Theatre Department’s spring production of The Crucible was not a show to be missed. Powerful performances from the entire cast, coupled with a riveting live soundscape and an immersive stage design, all combined to create an intense and moving final product.

While the final result was close to perfection, for a long time, there was no guarantee the show would come together at all. The rehearsal process was plagued with delays, including the days cancelled after the school threat, the trip to Atlanta, and of course, spring break itself. Aside from that, the lines themselves were especially difficult to memorize, thanks to the complex and highly specific writing style of Arthur Miller.

“With Arthur Miller,” explains Theater Director David Becker, “you have to memorize the lines down to their exact wording, because if you say it wrong in any way, the next line of dialogue in the script won’t make any sense.”

Another aspect that led to initial difficulty was Mr. Becker’s ambitious vision for the production. The Crucible is set in Puritan New England in the 1692, the year of the Salem Witch Trials, and written to use the theme of witch paranoia as an allegory for the Communist Red Scare in America in the 20th century. Acknowledging the universality of these themes over time, Becker decided to set the play in the year 2092, with the context that society was rebuilding in a post-apocalyptic America and had reverted to 17th century dialects and religious perspectives.

This recontextualization of the plot seemed overwhelming for much of the rehearsal process, as there was uncertainty as to how acting, stage design, costuming, and sound design would be affected. However, these worries were eased when everyone recognized that the foremost priority was to simply tell the story, which is relevant in any time and setting.

Other aspects of the production were unique and ambitious as well. Mr. Becker staged this show “in the round”, meaning that the audience sat on all sides of the stage. As a result, the set was designed so that the actors could to play out to all sides. Additionally, Becker wanted musical accompaniment for the production, so he assigned three cast members, Ben Brantley, Jacob Floyd, and Ian Clickner, to provide a live musical score throughout the play. The three used keyboards, guitars, percussion, and music production software to design a live soundscape that was ambient and minimalistic, yet abrasive and unsettling at the same time.

This ambition almost proved to be too much for the cast, as rehearsals became increasingly stressful as time progressed, and were pushed until 9pm during the final week. By the end of the process, everyone was exhausted, but nevertheless ready to perform.

The show’s opening night was originally set for Friday, April 19th, but fear of impending weather that afternoon caused it to be postponed. As a result the cast had two performances the next day, one at 3pm and one at 7pm.

Despite nervousness beforehand, the cast pulled off both shows immaculately. Actors knew their lines and performed their parts superbly, wowing the audiences. The soundscape provided the perfect accompaniment and the lighting accentuated the most important moments.

“I was so impressed,” remarked senior Javier Fortune, who acted as Giles Corey in the play. “I was worried about how it was going to turn out, but everyone killed it!

A production that had been in the works for months was over in one day, but an overwhelmingly positive effect was achieved. The show developed everyone’s performance skills, provided an impressive showing of the talent of Charlottesville High School Theatre, and passed on the play’s timeless message on the dangers of power and fear to a new audience.