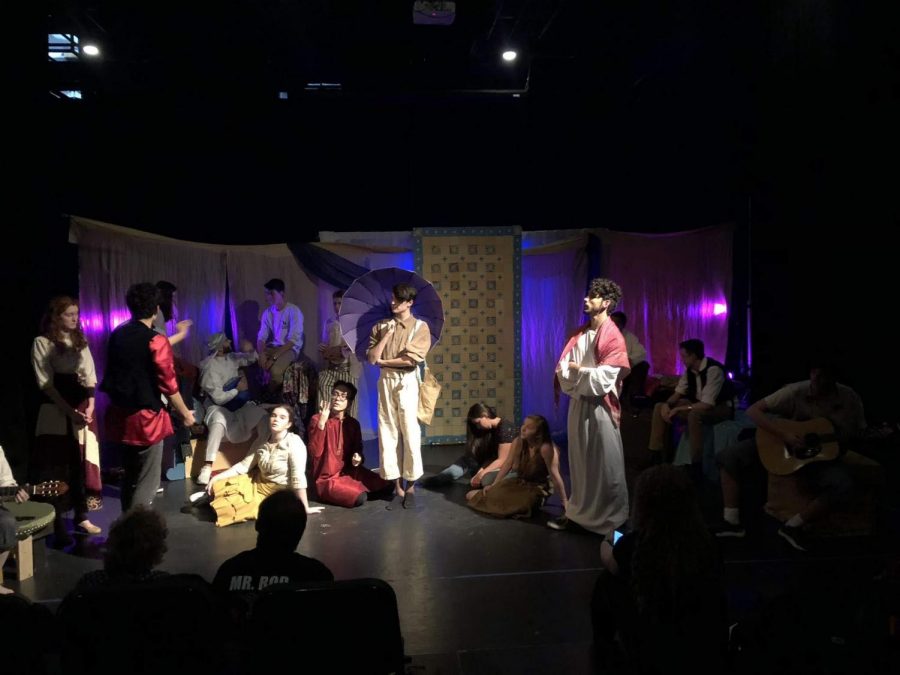 C.H.S. actors rehearsing scenes from Arabian Nights which they performed at VTA.

Many at C.H.S. likely aren’t aware that they don’t necessarily have to play a sport to be involved in varsity competition. Believe it or not, both marching band and theater are recognized by the Virginia High School League (VHSL) and both perform competitively against other schools throughout the fall season. This fall, in fact, TheatreCHS and Charlottesville High School’s Marching Knights each had historic seasons in terms of competitive success.

While the broad assumption is that the marching band only performs at football games, its real drive is to perfect its craft for band tournaments and competitions. Charlottesville High School’s marching band was the best it has been competitively in years this season.

“This is by far the best season in my seven years here,” says Band Director Jason Hackworth when asked how this season compared to those in the past. He added, “‘C.H.S. has consistently been one of the best band programs in the state, but I’d say this is one of the best seasons we’ve had in a decade, if not longer than that.”

Some of the Marching Knights’ major achievements this fall included coming in second place at the Lynchburg Classic, their first Virginia Marching Band Cooperative (VMBC) competition of the year, and winning at VMBC Regionals in Salem. They finished off a superb run by placing 7th at state competition. Their highest score of the year in competition was an 87 out of 100, compared to an 82 the previous year, showing definite growth.

Charlottesville High School Theater is involved in fall competitions as well. First, during late October every year, the school performs its fall one act play at the Virginia Theater Association (VTA) conference in Norfolk. This conference features 60 schools from across the state, all performing their one act plays before judges, who score and rank the schools. This year at VTA, C.H.S. was a finalist, with their one act play Scenes from Arabian Nights voted into the top 6 out of 60 schools, the second year in a row they had achieved this. This meant that the cast performed their play again in the finalist’s competition, where they finished in 4th place.

“The fact that for two years running, we are state finalists at VTA,” says Theater Director David Becker, “is a very very big deal.”

Following its showing at the Virginia Theater Association conference, TheatreCHS entered VHSL competition. Here, they also performed Scenes from Arabian Nights, where they advanced to Regionals for the first time in several years. They finished their successful run at Regionals in Blacksburg, where they came in 4th place out of the 5 schools there. This proved to be the end of competitions this year for TheatreCHS, but it did not mark the last time Scenes from Arabian Nights would be performed. The cast has been invited along with other schools to perform their one act play at the Live Arts Theater in Charlottesville this January.

So what has been the formula for the success of these programs?

“It’s the students, the full engagements, and the fact that we chose to do a really challenging show that focused on the strengths of the the kids in our programs,” says Mr. Becker. “Between our musicianship and our creative design, we really played to our strengths.”

Mr. Hackworth explains how making marching band participation voluntary in recent years has had a beneficial effect. “The biggest change is that no one out there has ever been forced to march. And so it’s creating a better work ethic; they’re there because they want to be.”

Charlottesville’s Theater and Marching Band have both had highly successful fall seasons. So if you’d like to be a part of this success in the future, why shy away? You don’t even have to be a part of C.H.S. band to be in Marching Knights, as they accept members of choir and orchestra to be in the front ensemble. Additionally, anyone can join the the color guard! Theater shows are fair game for everyone as well, regardless of acting experience. But if you don’t think you have the flair for the stage, the department also allows any student to work in tech for their shows. If you want to be a part of a winning program, Marching Knights and TheatreCHS are for you!