Reviving a Long Lost CHS Tradition: The Battle of the Bands 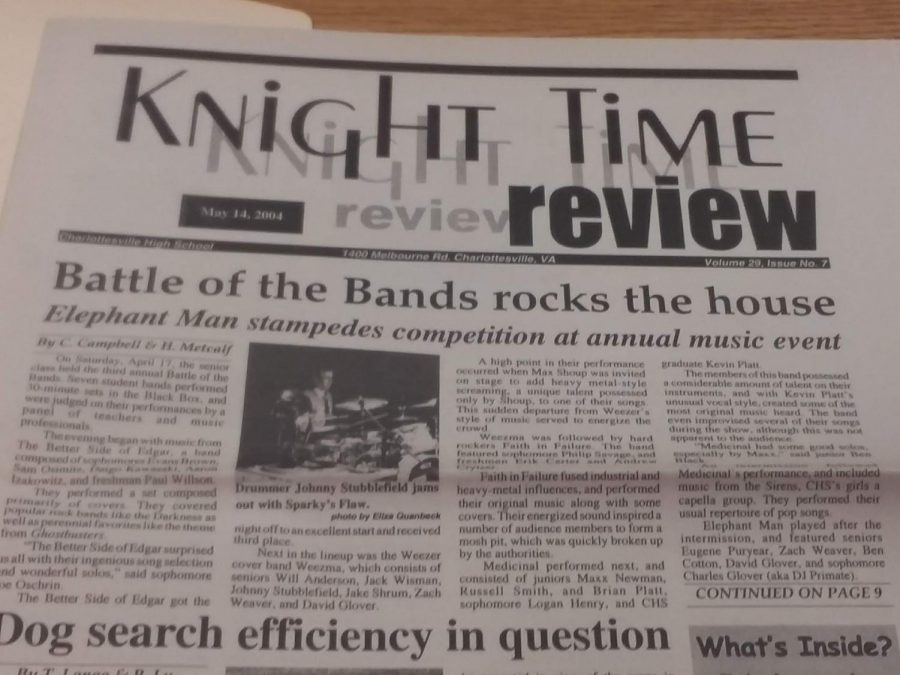 The Battle of the Bands was regularly a front page feature on KTR publications of the past.

The Battle of the Bands was an after school activity at CHS years ago, where students would form bands, practice both their own songs and cover songs, and then perform competitively in both the Performing Arts Center and the Black Box Theater. Back then, as it is intended to be now, its purpose was to raise money for the student council.

The Battle of the Bands hasn’t occurred at CHS for years, ending long enough ago in fact that most current teachers weren’t even present for it. One who does remember it, however, is Ms. Brown.

“I believe it ended in 2009, but it had gone on for years before that,” she recalls. “Whoever was running it didn’t do a good job of continuing it, plus kids stopped caring as much about bands when rap and electronic music started getting bigger.”

Another teacher who was able to contribute information about the Battle of the Bands was Charlottesville High School’s longest serving staple, Orchestra Director Ms. Thomas.

“Judges would come to these competitions,” she remembers. “Former CHS students and musicians who had made their mark in the community would judge it and pick winners. A couple times these assemblies were even held during the school day before they switched to nights and weekends.”

“One of these students who had a band is now working in music producing in Nashville,” she adds.

Other notable figures in the music world who got their start in a band at Charlottesville High School include the Dave Matthews Band drummer, Carter Beauford, and pop rock band Parachute, who first performed together under the name Sparky’s Flaw while playing at CHS.

These bands were taken very seriously, with members practicing feverishly on their own time and the concerts drawing large, excited crowds on show night. The Battle of the Bands was an iconic event at CHS during its time, but unfortunately, it went under due to poor management and shifts in the musical climate. However, this year, it may potentially be resurrected to raise money for student priorities such as prom.

A poll of students at CHS indicates the general consensus is that students would want to attend Battle of the Bands performances if they were held during the daytime.

Kason Thomas, a junior, says, “I would definitely enjoy a Battle of the Bands concert. Maybe not join a band myself, but I would like to come to the shows!”

Now that the Battle of the Bands has entered consideration between teachers and administrators, there is potential that it could become a full fledged school activity again.

“Do we have the musical talent at CHS for Battle of the Bands to start up again?” speculates Ms. Thomas. “I absolutely believe we do.”