Dreaming America: A Celebration of Charlottesville’s Immigrants Comes to the Black Box Theater 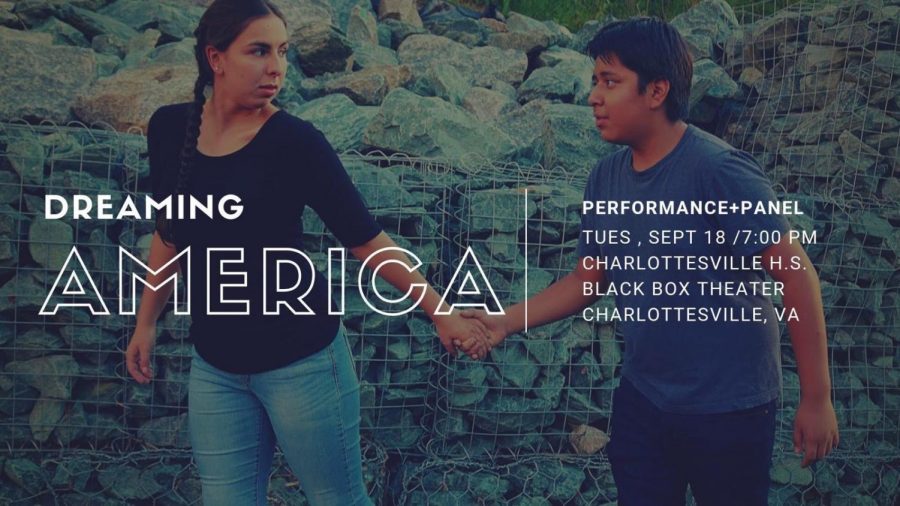 In conjunction with Charlottesville’s welcoming week for immigrants, a new type of theater production was performed in Charlottesville High School’s Black Box Theater this September. Directed by senior theater students Evelyn McKenney and Mila Cesaretti, Dreaming America is a piece that details the lives and emotions of young Latin American American immigrants.

Dreaming America is an example of devised theater, a type of theater production assembled  out of a previous publication. Mila and Evelyn studied a poetry collection named Dreaming America: Voices of Undocumented Youth in Maximum Security Detention, where editor Seth Michelson visits Shenandoah Valley Juvenile Detention Center in Staunton, an area where undocumented immigrant children are held right in our own backyard. He has set up a workshop that allows the Latin American adolescents to write poems about their feelings and experiences. These teens are given a voice they can share their hope, anger, and disillusionment through.

Dreaming America was performed on Tuesday, September 18th in the Black Box Theater in celebration of Greater Charlottesville’s Welcoming Week, a series of events across the country in September, where cities support their new immigrants. The Welcoming Week committee promoted the theater production around Charlottesville, helping it to receive a high turnout on its show date.

Mila and Evelyn casted seven CHS actors for Dreaming America they “knew would be dedicated to the show” and began rehearsals in early August. Rehearsals occurred several times every week, as the directors devised new aspects to the show and the cast refined its performance.

The team was assisted by Mercedes Herrera, a professional actress living in the Charlottesville area. Herrera was contacted immediately when ideas for this production began, due to her acting experience and Latin American Heritage. She provided invaluable help on acting technique for the cast, showing how to convey feelings and establish stage presence. She stated that, “This type of theater provides the emotional connection for audiences that other kinds don’t.”

The cast also met the editor of the book, Seth Michelson, and plans to perform Dreaming America at W&L University, where he works, in the future. “What you are doing is so important,” he says, “Because you are giving these kids a voice and showing the conditions in these facilities.”

In addition, Seth Michelson led a panel after the performance to discuss the situation of the Latin American youth who wrote these poems in their detention facilities and face inhumane treatment on a daily basis. The audience, which was deeply moved, donated over $700 to the CAIR Coalition, a foundation that provides legal aid for undocumented immigrant children.

When asked what this show says about Charlottesville High School, Theater Director Mr. Becker responded, “It shows that we are living up to the diversity we pride ourselves on.”